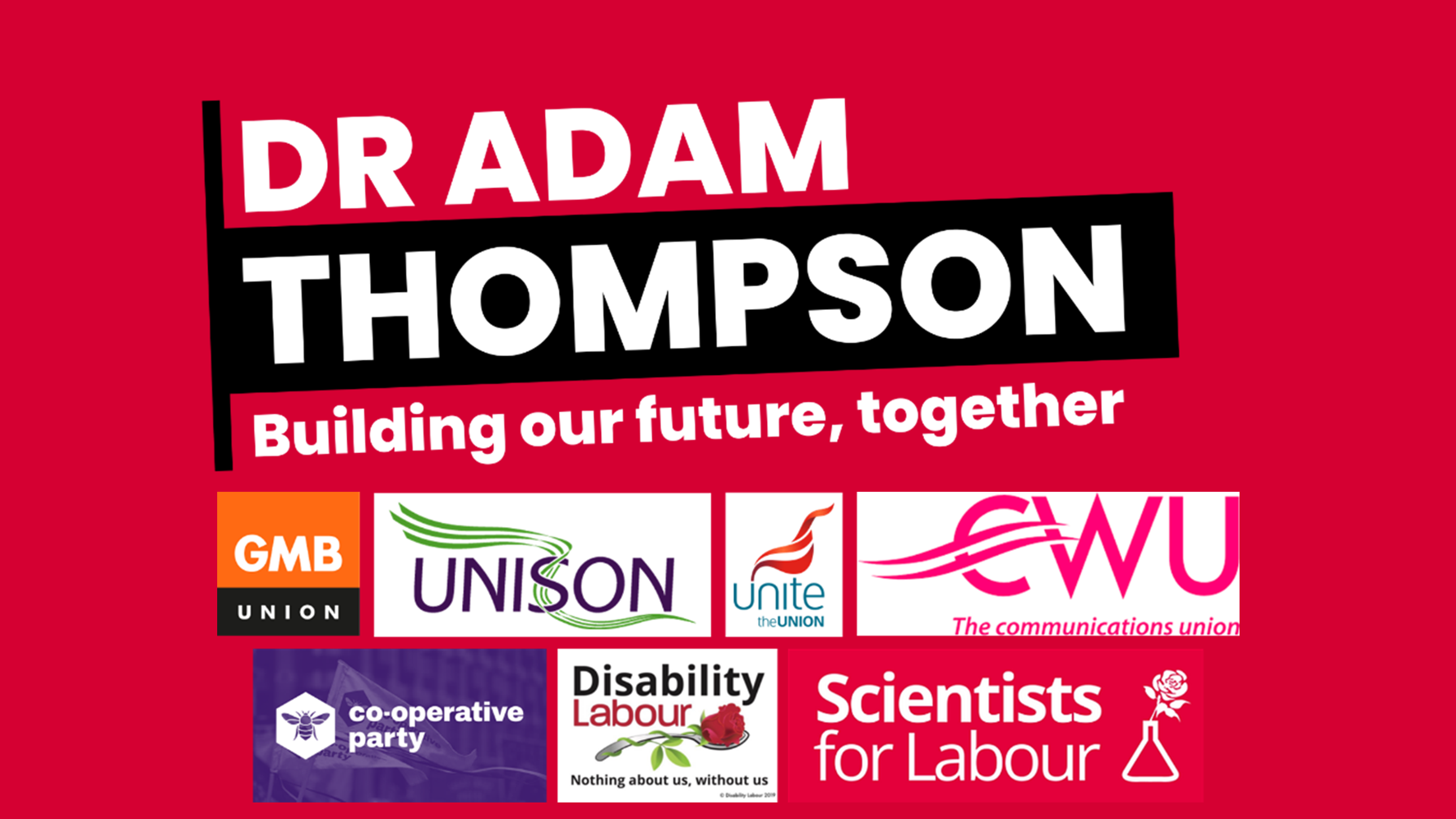 I’m honoured that so many unions, affiliates and Labour Party members from Erewash and beyond have come forward to support my campaign to be Erewash’s next MP. I’d like to thank all of them from the bottom of my heart, and share their words here.

My deepest thanks to UNISON, the GMB and Unite, the big three unions who have all endorsed my campaign. Further thanks to the Co-op Party, the CWU, Scientists for Labour and Disability Labour for also adding their support. The unions and affiliates do incredible work in Erewash, and I’ve always taken great pride in supporting their campaigns. I look forward to continuing to work closely with them!

“Adam has earned a well-deserved reputation as a leader. He is what Erewash deserves, and is the only candidate who will put our communities first.


“I have known Adam for a number of years. He is committed, approachable and dedicated to his work in the community and the Party. Above all else, he is local and understands local concerns. He will make an excellent MP and I have no hesitation in supporting him in his candidacy.” – Councillor Alan Chewings, Sawley Parish Council chair and Long Eaton Central and Sawley branch secretary


“Adam has my vote because he is both super-smart and super-kind. He has genuine empathy for humans and his desire to right societal wrongs spans his personal and professional life and leaves me in awe of his relentless drive to do good things and make the world a better place.

“I can’t wait for the day to arrive when he becomes Dr. Adam Thompson, MP. He will be brilliant for Erewash!” – Samantha Niblett, Ilkeston branch


“Adam and I have worked together at the University of Nottingham for many years. Adam has been my excellent union representative, a supportive colleague and a good friend.

“At work, Adam is a great teacher, a kind mentor and a skilled scientist. Adam really cares about our community and I have no doubt he will make us a great MP.” – Lewis Newton, Long Eaton West branch


“Adam is an incredible engineer, activist, and community campaigner.

“I’ve had the pleasure of working with him for a number of years, know the leading role he played in advising the Shadow Cabinet and Leader of the Opposition on COVID policy in 2020-21. He will be an excellent community MP.” – Ben Fernando, Scientists for Labour former chair


“Adam is one of the most dedicated and committed campaigners I have had the pleasure of working with.

“He has been a massive asset to Scientists for Labour, playing a key role in coordinating our response to COVID-19, as well as leading our climate change policy work. Adam will make a great candidate, and will work incredibly hard to support the people of Erewash.” – Joe Buckley – Scientists for Labour chair


“I have known Adam ever since we were both selected as candidates for the local elections.

“Since that time I have witnessed first hand how passionate and driven Adam is to make a difference for good. His character is of a strong moral socialist and I feel in no doubt that he will make a fantastic MP.” – Mark Hutchby, Ilkeston branch


“I have gotten to know Adam over the last few election campaigns and his attitude is both refreshing and inspiring.

“Adam is friendly, approachable, extremely enthusiastic and he is someone who listens to constituents opinions and is ready to work hard for them. I genuinely believe he would make an excellent MP for Erewash.” – Sharon Hutchby, Ilkeston branch


“I fully support Dr Adam Thompson. He is no stranger to hard work on the campaign trail and I’m immensely proud to have stood with him on many important national and local issues.

“He is fully committed to representing the people and very capable of taking the hard decision that will be in the best interests of local residents. Trust him with your vote!” – Dave Doyle, Long Eaton and Sawley branch


“Erewash is in desperate need of political change, of that we have no doubt.


“I met Adam when he stood in the last election, he motivated the local activists and introduced us to new campaign techniques, as well as technologies.

“He is a hard working campaigner who has lots of ideas about how to increase the Labour vote at a local level. When he organised the Derbyshire council candidate selections, I saw that he could make tough decisions and get them right, as well as get people from all sides of a debate to trust him.” – Joel Bryan – Deputy Mayor of Belper


“I’ve known Adam for some years as a member of the same CLP. I’ve worked alongside him in a number of groups and activities from policy and communication groups to picket lines.

“In each case Adam’s calm, considered and knowledgeable approach marks him out as a natural leader. He has often been referred to as “the hardest working person in Erewash CLP” and I’d certainly endorse this. That capacity for well organised and sustained effort on behalf of others reflects his deeply held principles and beliefs. I think he would make an excellent representative.” – Terry Reilly, Long Eaton West branch


“We are supporting Adam Thompson for Erewash.

“Not only is Adam hard working and enthusiastic, he is also someone who has a natural empathy with people – their hopes and concerns – and people of Erewash have an urgent need for someone who they can connect with.” – Liz and Mick Brown, Long Eaton West branch


“With unwavering integrity, infectious enthusiasm and plans that everyone can get behind, Adam absolutely has my vote.

“As well as being great company and a pure delight to spend time with, he brings a tangible sense of hope here in Erewash, with an exciting, manageable vision that will allow the us to be united, motivated and well led as we begin to build our future together.” Naomi Roberts, CLP women’s officer


“I have known Adam ever since I joined the Labour Party in 2016 and he was nice enough to take the time to explain how everything works.

“Since then, I have got to know someone who possesses phenomenal energy and drive, a person with a keen eye for detail and who really cares about getting the job done. Not only do I regard him as a good friend, but he is a tireless worker and a genuine inspiration to all around him.” – Jim Hardman, Ilkeston branch


“I met Adam during the winter 2019 general elections – I believe he has a strong powerful voice and is up to the job to stand up against the Conservatives and make Erewash a better living environment for the many, not the few.” – Henry Icke, Ilkeston branch


“A dedicated, hard working and strategically minded campaigner who knows what people want to see, Adam is the best chance of turning Erewash back to being a Labour seat and would make a fantastic MP making a real difference.” – Nathan Oswin, Labour Society of Campaigners founder


“I’ve known Adam for the last few years and have been really impressed with how dedicated he is. Adam is an active campaigner and he really cares about the Erewash community and the people who live there.