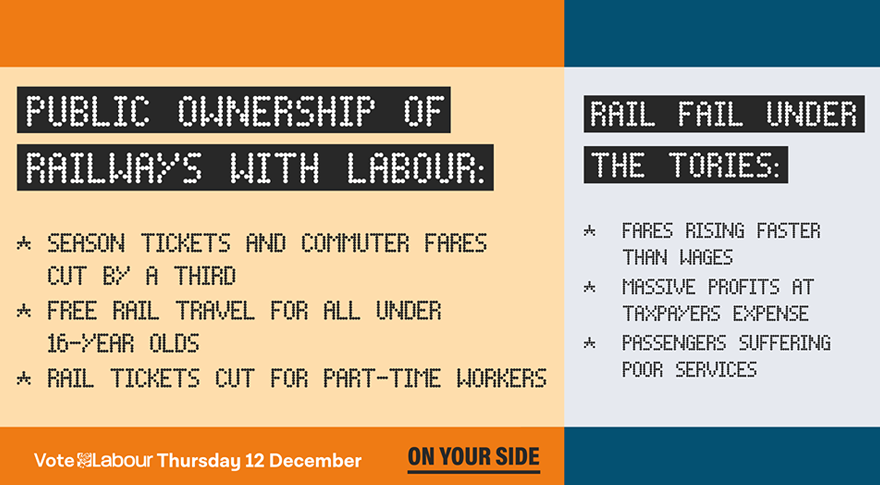 Only Labour will solve the railway fare crisis

On Monday, Labour announced the biggest ever rail fares cut of 33% in a move that will save the average commuter over £1000 a year. Meanwhile, over the weekend we learnt that rail fares are set to rise again by an average of 2.7% next year.

Privatisation has created one of the most complex, exploitative and expensive ticketing systems in the world. Labour will scrap the bewildering and outdated fares and ticketing system that discriminates against part-time workers, discourages rail travel and excludes the young and low paid.

Labour’s plans for an integrated railway under public ownership will:

Cut regulated rail fares by 33% from January 2020, saving the average commuter £1097 a year. This is the biggest ever reduction in rail fares, to tackle the crisis of unaffordability on the railway and give relief to millions of rail commuters from years of excessive price rises.

Deliver a simple, London-style ticketing system across the nation, delivering contactless payments and creating zonal rail fares that will apply across all modes of public transport.

Labour is on the side of passengers which is why we will introduce a simpler, fairer and more affordable system for all, integrated with other forms of public transport.

Rail passengers who want to save hundreds or thousands of pounds next year need to vote Labour on 12th December.

Labour will deliver a railway in public ownership for the many, not the few.