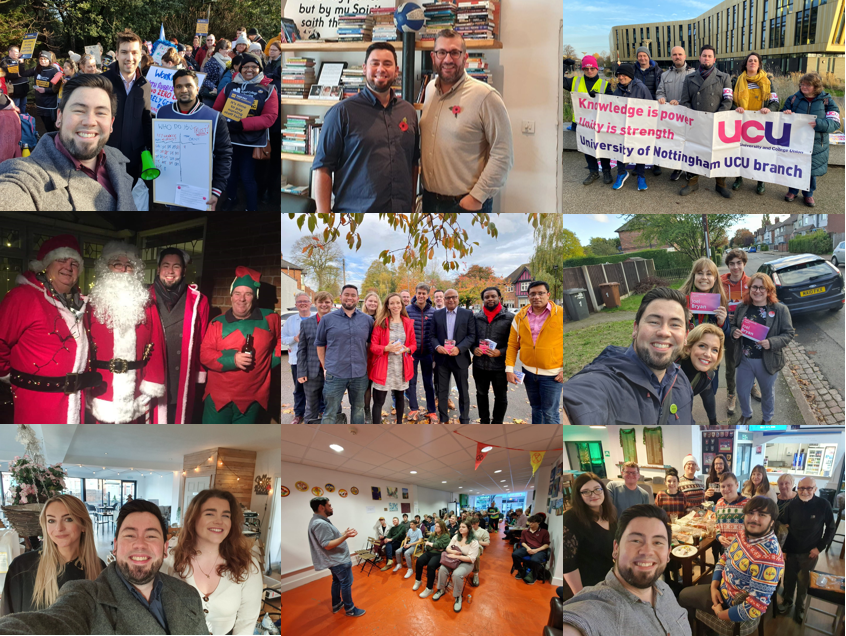 Firstly, a very happy holidays to you – I wish you the very best for whichever winter holiday you choose to celebrate, and a very happy new year. It’s now been almost exactly five months since I was selected to be your next Labour MP, and I wanted to provide a short end of year report on my activities as your Labour Party candidate.

It’s been one of the busiest five-month periods of my life, but I have to say I’ve enjoyed every second. From the 2,675 conversations we’ve had on doorsteps, through talking to striking workers on picket lines, to meeting refugees who crossed the channel in small boats and found themselves in Derbyshire, it has been an incredible experience so far.

There have been incredible highs, not least winning the recent by-election in Long Eaton, and difficult lows, most notably being moved to tears while hearing harrowing stories of channel crossings. These experiences have only strengthened my desire to work as hard as I can to be your next Labour MP, and to do everything I can towards that goal between now and the next general election

I have met with leaders from across our community in businesses, charity, faith and trade unions and have taken up issues affecting local people directly, such as the recently announced closure of Long Eaton HSBC, just two short months after the Ilkeston branch closed.

But winning the next general election is not something that I can achieve on my own, and it is through the efforts of our wonderful Labour family in Erewash that we have managed to achieve so much in the past few months. It is by the strength of our common endeavour that we had Councillor Joel Bryan elected to Derbyshire County Council in October, and it is by that same strength that we will pull together towards the local elections this May, and onwards towards the general election.

Regarding the May 2023 local elections, our team of approved potential candidates has been steadily growing over the past few months and we will soon move towards the formal selection process, to choose candidates for our key seats. There is a big plan in place for running the campaign between now and May, but it’s crucial we have good people in place to represent the Labour Party across the Borough. If you think this could be you, do get in touch for a chat.

While it’s been a busy five months, we’re still just getting started. Until we have met every community leader and spoken to every constituent, there is always going to be more work to do, and I’d like to particularly thank the new volunteers who have gotten involved with the local party in recent months – you’re all a credit to Erewash Labour Party and I know I speak for the whole CLP when I say it’s a great joy to have had you getting more involved in the last few months.

Erewash Labour Party is proving itself to be a young, vibrant, local-focussed party with big goals and big ideas, and it’s an honour to be working with you all.

As we move into the new year, I’m looking forward to ramping up our activity towards the local elections in May – we’re going to set high targets for the number of conversations we have on doorsteps and on the telephone, but I know the excellent team of candidates are going to pull it off.

So, onwards and upwards towards taking control of Erewash Borough Council in May 2023, and getting a Labour MP elected in the general election, whenever it may be.